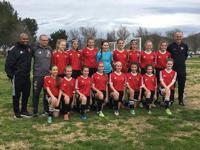 Three 2003 Fury Soccer players traveled to the first ever GPS Bayern Munich Junior Showcase in California and played alongside girls from New York, Ohio and Canada at this prestigious event in January. Gracie Boyles, Tricia Lemasters and Lizzy Edwards performed well helping their 2003 Fury/NY team place second in their group with a 2-1-1 record.
The team picked up victories against GPS West A (2-1), GPS West B (6-1), and tied GPS Carolina.  They lost to the eventual group Champions, GPS California, (3-2).
“Our girls accounted well for their performances. Lizzy was solid in the goal coming up with some key saves throughout the tournament. Gracie was solid in defense making some great tackles and winning a lot of her 1 v 1 battles. And Tricia had an outstanding performance and led the team in goals scored. It was a pleasure coaching our girls along with the rest of the players.” Fury Soccer Director Kernell Borneo said. The girls bonded well and played as a team despite only having one training session, he added.
The girls also had the opportunity to meet GPS Director Peter Bardely and Bayern Munich International Director Sabastian Dremmler.

Congratulations to our U14 boys for winning the FC Bayern Munich Junior Showcase in California the weekend of January 7th and 8th. The boys represented well going 3-0-1. They picked up victories against GPS West (7-2), GPS/ME/NH Regional team (2-1), GPS Massachusetts (3-0), and a tied against GPS Carolina Elite (1-1).
After the tournament, the boys had the opportunity to meet GPS Director Peter Bardely and Bayern Munich international Director Sabastian Dremmler.
Way to go boys!